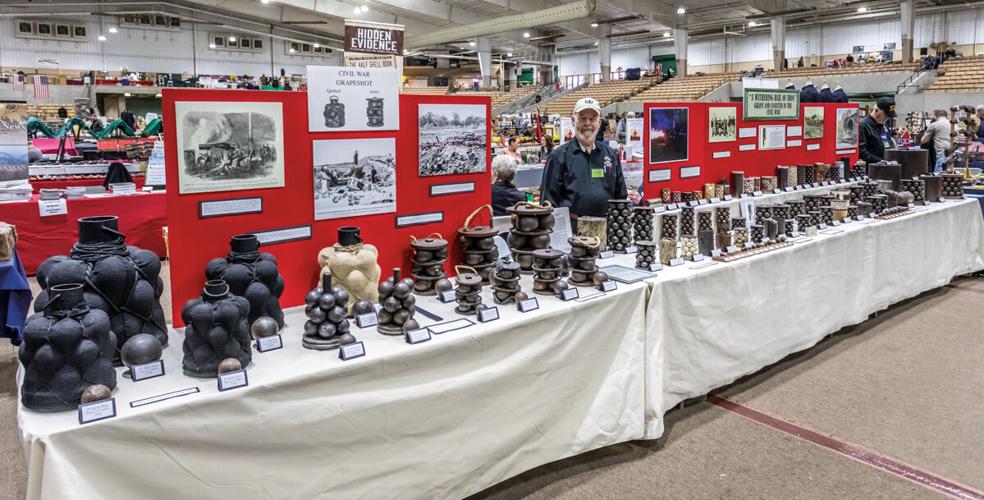 David Gotter standing with his impressive display of canister and stands of grape shot at the Middle Tennessee Show and Sale, Franklin, Tenn. 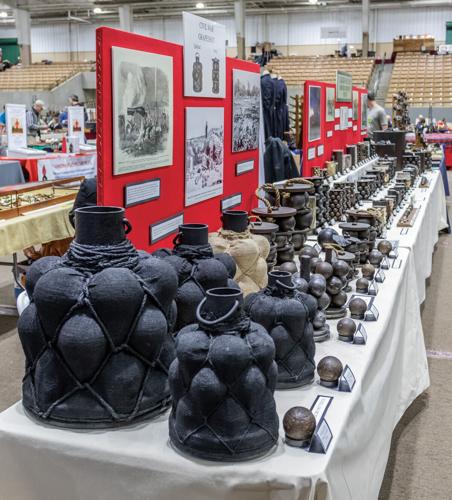 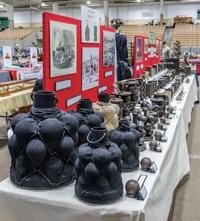 Gotter’s display of canister and stands of grape shot. 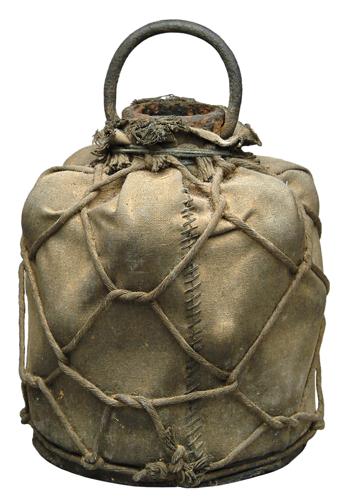 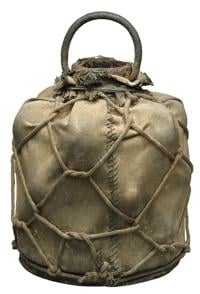 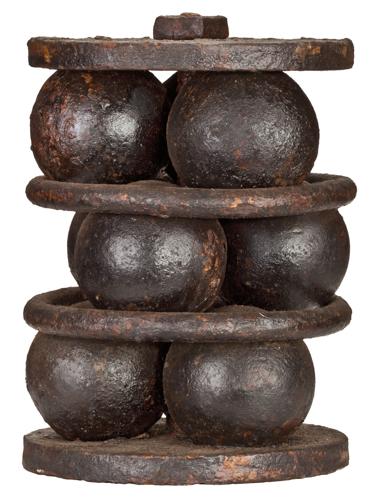 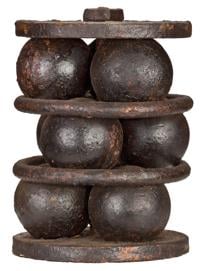 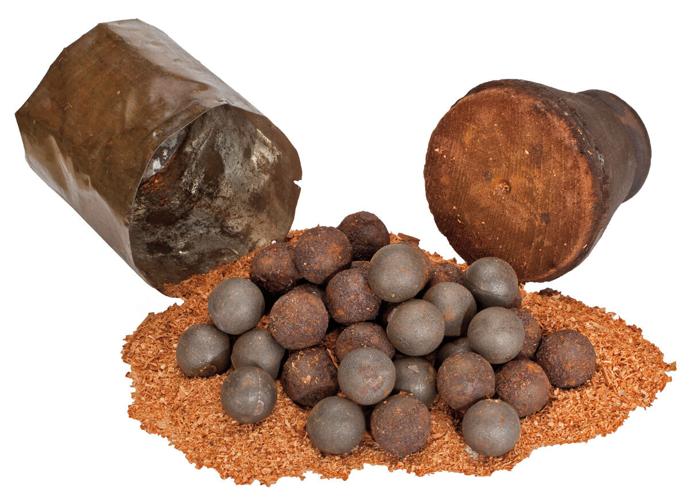 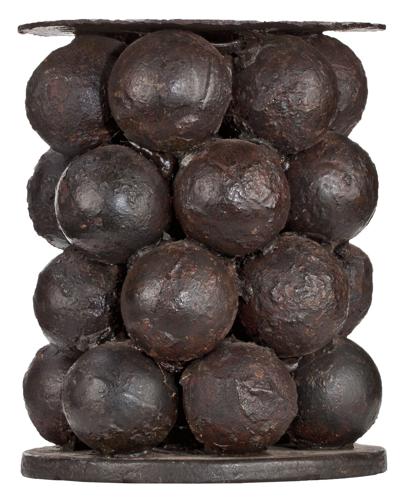 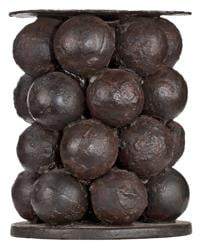 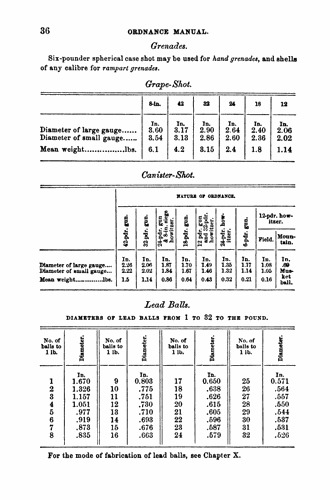 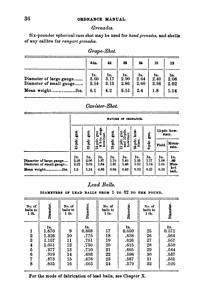 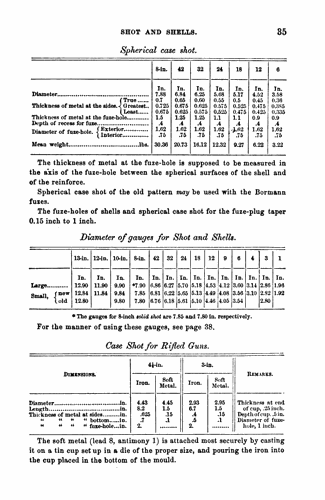 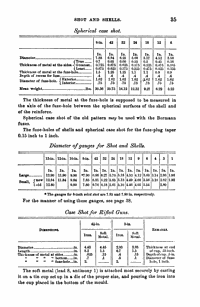 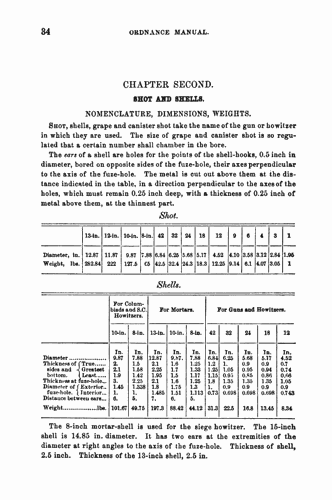 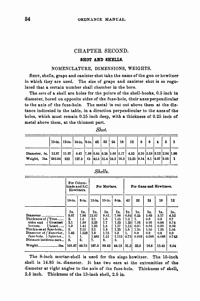 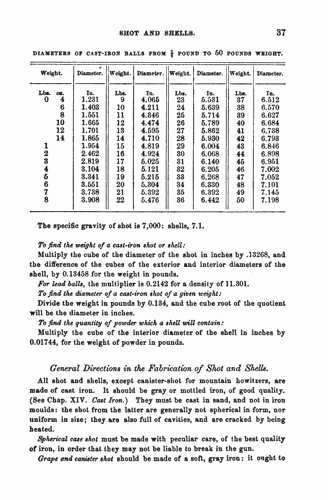 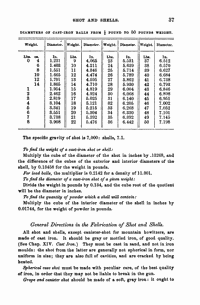 My first interest in the Civil War came in the early 1960’s with the 100th Anniversary. At the time, I was in my early teens and unaware of collectors or collecting opportunities in my part of Ohio, so I read everything I could on the subject. After college, I moved back to Ohio, to the Ashland/Mansfield area, and in 1977 I learned about the Ohio Civil War show. I missed the first one and missed another one a few years later. I haven’t missed one since.

My initial shell collection ranged from 6-pdr. cannonballs to 100-pdr. Parrott shells and about anything in between. In the late 1908s I purchased a 2.6-inch Wiard canister adding it to my collection. It’s difficult to imagine how many pieces a shell might burst into, but it’s not hard at all to imagine what’s going to happen when the artillery starts firing canister.

I started with a few of the basic rounds; 6-pdr., 12-pdr., and a few of the common rifle rounds; then I wanted more. At first I knew what calibers I didn’t have, which ones I wanted next, and began filling that list.

After I found most of the basic examples, the oddball ones usually weren’t available ready to buy and display. There were few reliable shell books, and even fewer with canister information in them, so I was pretty much on my own. I found a lot of parts in the “anything for a dollar” boxes on dealer tables, began buying parts, and learning what shot went with what plates. In those days, dealers and relic hunters were after shells, and canister parts were “scrap.” It has taken over 30 years to acquire 65 or so different canister specimens.

In the early 2010s, I decided to add stands of grape to my collection. I had pretty well exhausted canister as a pursuit; adding grape shows the difference between grape and canister. Army grape can be found from time to time, but quilted grape is almost impossible to find. I have two original quilted grape stands, a 6.4-inch and a 7-inch. The larger sizes are almost non-existent; the 15-inch, as far as I can learn, does not exist anywhere. I found the specifications and built one so that my collection was complete. With the addition of 14 stands of grape to the display, I have a total of 80 specimens, weighing around 1,500 pounds.

I believe this is the most complete collection of its type in existence, and at this time in the world of collecting, probably could not be duplicated. This collection is parts of all of us, and I owe a huge Thank You to all the collectors, dealers, relic hunters, and friends who supplied me with complete stands, parts, and assistance throughout the years.

A canister round was a thin-walled metal cylinder packed with musket balls, or large lead or iron balls, and sawdust. Depending on bore diameter, typical Civil War canister shot was as small as .65 inch and as large as 2 inches. Some canister rounds have been found that were packed with nails, pieces of hinges, and other scrap metal. These unusual canisters are known as Langrage.

A round wooden block, or “sabot,” was attached to the bottom of the canister. The sabot helped to keep the round centered in the bore and also prevented the propellant gases from shooting out around the sides of the canister. Attached to the bottom of the sabot was the cloth bag that contained the powder that propelled the round. When the powder ignited, the force of the explosion would burst the can and the shot would spray out of the muzzle of the cannon with a murderous effect.

“The enemy fell like grass before the mower.” “It seemed as if whole companies were wiped out of existence.” These quotes from Civil War soldiers are typical descriptions of the effect of canister. Canister was the artillerymans most lethal load and probably killed more Civil War soldiers than all other types of artillery rounds combined. Canister was only effective at short ranges, 400 yards or less, but like a blast from a giant sawed-off shotgun, the mass of slugs from the round would spread out and decimate everything downrange. When the enemy was within 150 yards, soldiers would load the guns with two or even three rounds of canister and fire them all at once.

Army stands of grape typically consisted of 2 iron plates, 9 iron shot, a center bolt and 2 iron rings. The shot were arranged in 3 layers, with the bolt and rings holding the layers of shot together. The diameter of the shot varied with the bore diameter of the cannon.

Quilted grape was generally used in the naval service, fired from ship to ship, and intended to sweep the decks, and damage masts and rigging. The shot in the stand was large enough to cause physical damage to the ship as well as members of the crew.

Quilted grape was constructed with a base plate and an attached center post. The shot were stacked in layers around the post and a canvas bag stitched around the shot to hold them in place and keep its round shape. Most stands of quilted grape used 3 layers with 5 or 6 shot per layer. Depending on bore diameter, typical Civil War grape shot was as small as 2 inches and as large as 4.5 inches.

Note: In the following table all shot diameters are ‘Nominal’ +/- .01-inch/.03-inch are encountered.

Want to subscribe to Civil War News, Artilleryman magazine, or the Military Antique Collector magazine? Click here to go to the subscription page.

Shot Tables below from the 1862 U.S. Ordnance Manual.

The Ordnance Manual for the Use of the Officers of the United States Army. United States: J.B. Lippincott & Company, 1862.