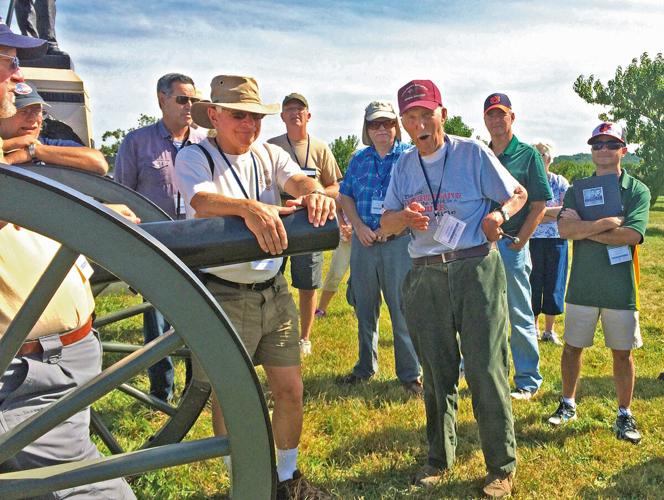 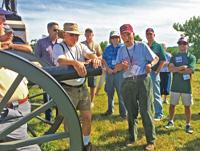 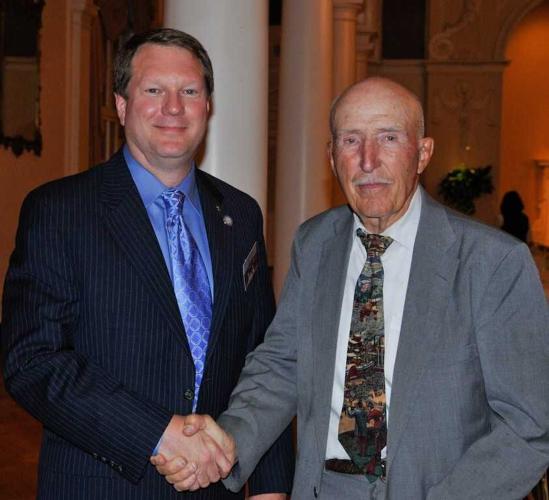 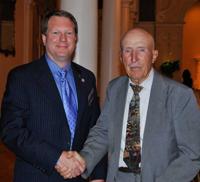 Civil War News publisher Jack W. Melton Jr. and Ed Bearss at a Civil War Round Table of Atlanta meeting in the 2010s.

Originally published in the November 2018 issue of Civil War News.

Edwin Cole Bearss was the Chief Historian Emeritus of the National Park Service. He has remarked on his favorite Civil War books. First, he lists those written on the Southern side of the war, and then those on the Northern side. He ends with his choice for best autobiography.

Douglas Southall Freeman (1886–1953), whose father served four years in Lee’s Army of Northern Virginia, wrote a 4-volume series in 1934–1935. It was titled Robert E. Lee: A Biography. It won the Pulitzer Prize in 1935. Freeman walked down Monument Avenue in Richmond, Va., on his way to work as the editor of the newspaper, the Richmond News Leader. When he arrived at the statue of Robert E. Lee, he would stop and salute General Lee. He did this daily.

There was some criticism of this Freeman series. Bearss recalls the comments were about the supposed feud between Robert E. Lee and James Longstreet, and other things. As a result, he said Freeman wrote three volumes called Lee’s Lieutenants. The three volumes are:

Bearss remembers reading these in San Diego Naval Hospital, California, where he spent time during his twenty-six months of hospitalization that followed his wounding at Cape Gloucester, New Britain, January 2, 1944. The Battle of Cape Gloucester was fought in World War II’s Pacific Theater. He added that he learned something interesting from Burke Davis (1913–2006) in his biography of Colonel Chester Puller. “Chesty” Puller, whom Bearss describes as a “Marine’s Marine,” was reading Lee’s Lieutenants during the same time period.

He remembers reading this series when he was doing graduate work at Indiana University. The last volume, Stillness at Appomattox, won the Pulitzer Prize for History. It also won the National Book Award for non-fiction. Ed laughed and said someone asked, “Who won the Civil War Centennial (1961–1965)?” He answered “Bruce Catton.”

The famous author Mark Twain (Samuel Langhorne Clemens) paid for its publication. Grant struggled for a year with throat cancer as he wrote his memoirs. The final pages were delivered to Mark Twain five days before Grant’s death on July 13, 1885.

The book was a huge financial success. Grant had suffered financial problems in his later years. The book took in more than $450,000 which in today’s economy would be equivalent to more than $10 million. The income gave financial security to Julia, Mrs. Grant, for the rest of her life.

Mark Twain called this work by Grant “a masterpiece.”

Edwin Cole Bearss (June 26, 1923 – September 15, 2020), a United States Marine Corps veteran of World War II, is a military historian and author known for his work on the American Civil War and World War II eras. He was a popular tour guide of historic battlefields. He served as Chief Historian of the National Park Service from 1981 to 1994.

Bearss received many awards and honors in the field of history and preservation: