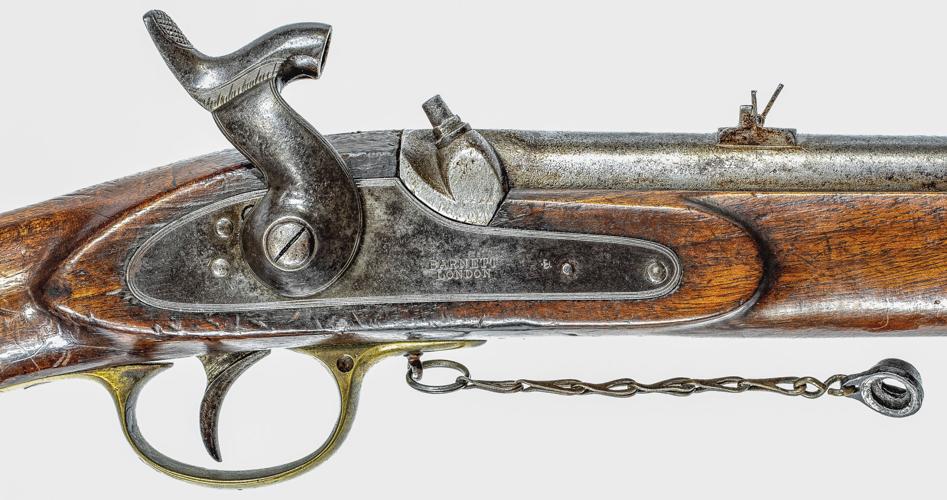 Lock and rear sight of a Barnett manufactured P1856 cavalry carbine imported by the Confederacy. 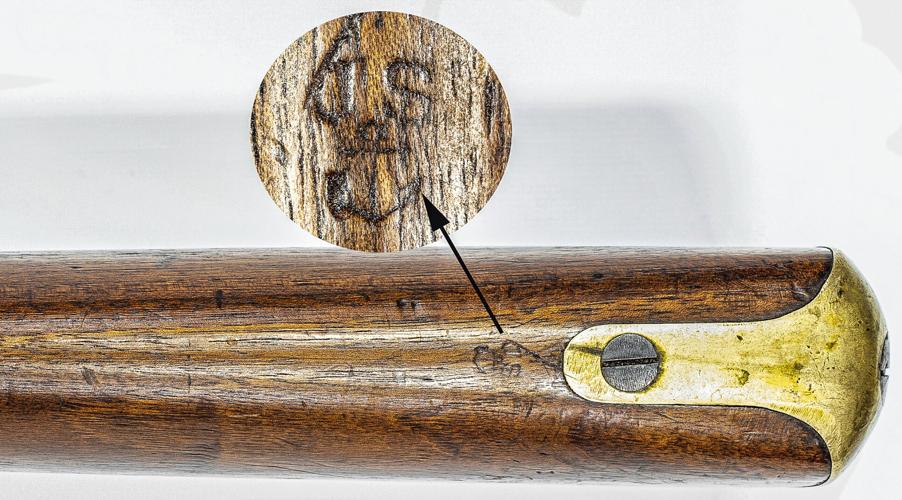 JS / Anchor Confederate inspection mark on the comb of the stock of the Barnett P1856 cavalry carbine.

While the .577 bore of the Enfield does not appear “small” by today’s standards, it was somewhat revolutionary in concept for the period, as at the time most world powers still relied upon muskets and rifles that were nominally .69 to .71 caliber. The fact that the Enfield was rifled was revolutionary as well, as up until that time standard infantry doctrine called for rifled arms to only be issued to specialty troops and relied upon the smoothbore musket for line infantry. Now, all British infantry would be issued rifled long arms.

During the early part of the 1850s, the British cavalry was armed with a variety of outdated and non-standard arms. The most widely issued was the Pattern 1844 yeomanry carbine, a .66 caliber smoothbore percussion weapon; the next most common was the .66 smoothbore Pattern 1847 Padget percussion carbine, many of which were either converted from flint or made up from old flintlock parts, some of which still retained their original Georgian era proof marks. Additionally, some Padget’s were rifled in an attempt to make them more modern, and several regiments serving in India, South Africa, and Ireland used double-barreled carbines of various patterns that saw issue only to those regiments. None of the cavalry long arms were standardized. Small arms standardization had been one of the goals of Board of Ordnance Inspector George Lovell, who helped champion the modernization of British military small arms.

At the same time the Pattern 1853 was revolutionizing the concept of the infantry musket, it was becoming clear that some form of breech loading rifled carbine was going to be the best choice to arm the cavalry. The problem was to decide which one. In 1855, a number of American made Sharps Model 1855 carbines were ordered for the British cavalry. These were delivered between May 1856 and April 1858, with a total of 6,000 seeing British service. All were issued to cavalry regiments serving in India. In 1855, another American design was ordered as well, the Greene patent carbine. Over the next 18 months or so, some 2,000 of these carbines were delivered to the British military, but these arms saw only trials issue and service, and no real use in combat.

Domestic designs were considered as well, including the Calisher & Terry breechloading carbine, and eventually the Westley Richards “Monkey Tail” breechloading design. None of these arms provided the solution the British military sought. In almost all cases the primary issue was the ammunition. In the case of the Greene and Sharps carbines, the problem was that combustible cartridges sturdy enough to withstand the rigors of field service tended to be too tough for the carbines to use and detonate effectively, while those that were easily cut open by the Sharps’ breech block or pierced by the Greene’s firing pin shaped flash channel tended to fall apart in the cartridge box during regular field service. The Terry carbine had accuracy and durability issues with its patent ammunition. Other breechloading patterns and designs were tested in smaller numbers, but none proved to be the answer the British were searching for.

The end result was that in 1856 the Pattern 1856 cavalry carbine was authorized, a gun essentially based upon the carbine in service with the East India Company at the time, and thus known in service as the East India Service Pattern. The gun was a compact, muzzle loading percussion firearm with a 21 inch barrel with the service standard .577 inch bore. The carbine closely resembled the P1853 rifle musket it was patterned after, with a blued barrel and barrel bands, color case hardened lock, and brass furniture. The ramrod was the captive design, mounted to a stud under the barrel near the muzzle with a pair of swiveling arms.

The rear sight was the same pattern used on the P1853 artillery carbine and consisted of a fixed 100-yard leaf and two additional folding leaves for 200 and 300 yards, respectively. The sight had been developed by Thomas Turner as part of the design of the P1853 rifle musket and had originally been intended for use in conjunction with an adjustable long-range ladder sight regulated out to 1,000 yards. This pattern sight was never officially adopted for general issue with the P1853, but the 3-leaf portion used for 100, 200, and 300 yards did see use on the carbines until a new sight was adopted for cavalry and artillery carbines in 1861.

The carbine was 37 inches in overall length, and included an iron sling bar opposite the lock, secured to the stock with iron side nail cups through which the lock mounting screws passed. Although the majority of the P1853 family of arms utilized progressive depth rifling, the majority of P1856 carbine production did not, although the standard 1:78 inch rate of twist was retained in the carbine bores. In the end, in an era where even the U.S. military had discovered that breechloading carbines were the wave of the future, the British military settled upon an essentially obsolete design and kept it in use for a decade, when it was finally replaced by the Snider carbine, the British version of the American “Trapdoor” system, that altered percussion muzzle loaders to breech loading cartridge guns.

Despite the obsolescence of the design, a number of the British Pattern 1856 cavalry carbines were purchased by the belligerents during the American Civil War. However, extant examples are rather scarce for a number of reasons, making them highly desirable on the collector market. The U.S. Government only purchased about 250, while the Confederacy purchased roughly 10,000 of the carbines, by most researchers’ accounts.

The majority of the Confederate purchased carbines appear to have been acquired and delivered during the last half of the war. In fact, the Payne Ledger, which details the late war Confederate imports through Wilmington, N.C., notes that some 4,700 English cavalry carbines were landed there between July 1863 and November 1864. These guns were likely examples found today that are marked with the {ANCHOR} / S inspection mark on the comb of the stock, forward of the buttplate tang, and have lock dates of 1863 or 1864. The carbines acquired earlier in the war, before the winter of the 1862, had the well-known JS / {ANCHOR} inspection mark in the same location.

Purchasing documents located in the McRae papers indicate that Caleb Huse purchased 120 Pattern 1856 cavalry carbines from S. Isaac, Campbell & Company on August 1, 1862. He paid 65 shillings each for these guns, and they were shipped to the Confederacy aboard the blockade-runner Gladiator. Huse purchased one additional case of 20 carbines from the same source on August 6, 1862, for the same price. These guns crossed the ocean in the hold of the blockade-runner Harriett Pinckney. These two orders only account for 140 carbines and may be an indication of why the JS / {ANCHOR} marked guns are so scarce. To date, the known Confederate marked Pattern 1856 carbines have locks marked TOWER for the Birmingham contractor produced gun and BARNETT, or in extremely rare instances London-based gunmakers EP BOND, or Parker, Field & Sons.

While 10,000 cavalry carbines may seem like a significant number to have been imported, it is quite low when compared to the fact that most researchers put the total of all “Enfield” pattern English arms imported by the Confederacy at somewhere between 300,000 and 500,000. Even by the most lenient standards, that puts the importation of Pattern 1856 cavalry carbines at between 3%-4% of all Enfield pattern arms obtained by the Confederacy. Their absolute paucity on the collector’s market underscores the fact that these guns saw hard use during the war and were often used up or destroyed in the field. Extant examples of Confederate marked Pattern 1856 carbines tend to appear in two conditions; heavily used and well-worn, or nearly mint guns acquired from captured Confederate blockade runners. In either case, the guns are very scarce and are rarely found available for sale.

One reason for their lack of survival comes from the Report of William H. H. Terrell, Adjutant General for the State of Indiana. The report dated December 1865 concerning the Seventh Indiana Cavalry states in part On the 21st of December (1864) the Seventh Cavalry moved from Memphis with a cavalry expedition under General Grierson. On the 28th Forrest’s dismounted camp at Vernon, Mississippi, was surprised and captured, and a large quantity of rebel stores destroyed, including sixteen railroad cars, loaded with pontoons for Hood’s army, and four thousand new English carbines. This clearly indicates one very good reason for the scarcity of these guns. When the Federal troops captured them, they destroyed them. Since nearly all U.S. cavalry regiments were armed with some form of repeating or breech loading carbine, a muzzle-loading carbine was of no real value. However, U.S. troops regularly used captured C.S. imported Enfield rifle muskets, as they were of use to the infantry.

The carbines were not popular with Confederate cavalrymen either. Their short barrels and captive ramrods were universally despised. When Confederate inspected examples of the carbine are encountered, the swivel ramrod is often missing or has been modified. Confederate General J.E.B. Stuart, commander of the Army of Northern Virginia’s cavalry corps had a strong preference for the slightly longer 24 inch barreled Pattern 1853 Enfield artillery carbine, which used a conventional, rather than a swivel, ramrod. To this end, he penned a letter on October 7, 1862, soon after the Battle of Antietam, which read in part, an …application from General Stuart, commanding cavalry, to exchange rifles, for the Enfield carbines (artillery) in the hands of our infantry. It is not clear that anything came of the request, but the overall preference for Enfield artillery carbines and “short” Enfield rifles by Confederate cavalry commanders in both Virginia and Tennessee is well known.

In the end, the British Pattern 1856 cavalry carbine was not only a compromise for the British military but also for the Confederate cavalry, which was provided with a reasonable number of the guns, but never found any particular favor for them and regularly sought to acquire a more suitable weapon for mounted use.

Tim Prince is a full-time dealer in fine & collectible military arms from the Colonial Period through WWII. He operates College Hill Arsenal, a web-based antique arms retail site. A long time collector & researcher, Tim has been a contributing author to two major book projects about Civil War era arms including The English Connection and a new book on southern retailer marked and Confederate used shotguns. Tim is also a featured Arms & Militaria appraiser on the PBS Series Antiques Roadshow.

Want to subscribe to Civil War News, Artilleryman magazine, or the Military Antique Collector magazine? Click here to go to that page.