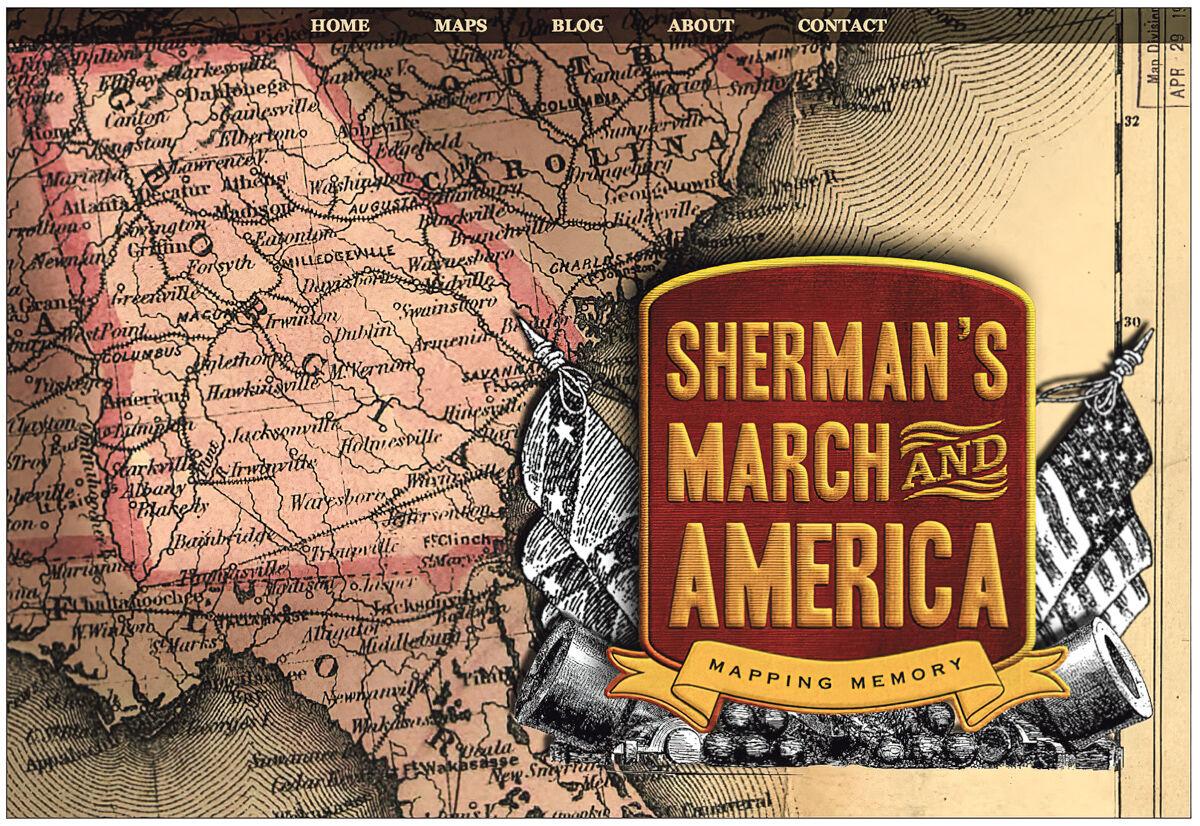 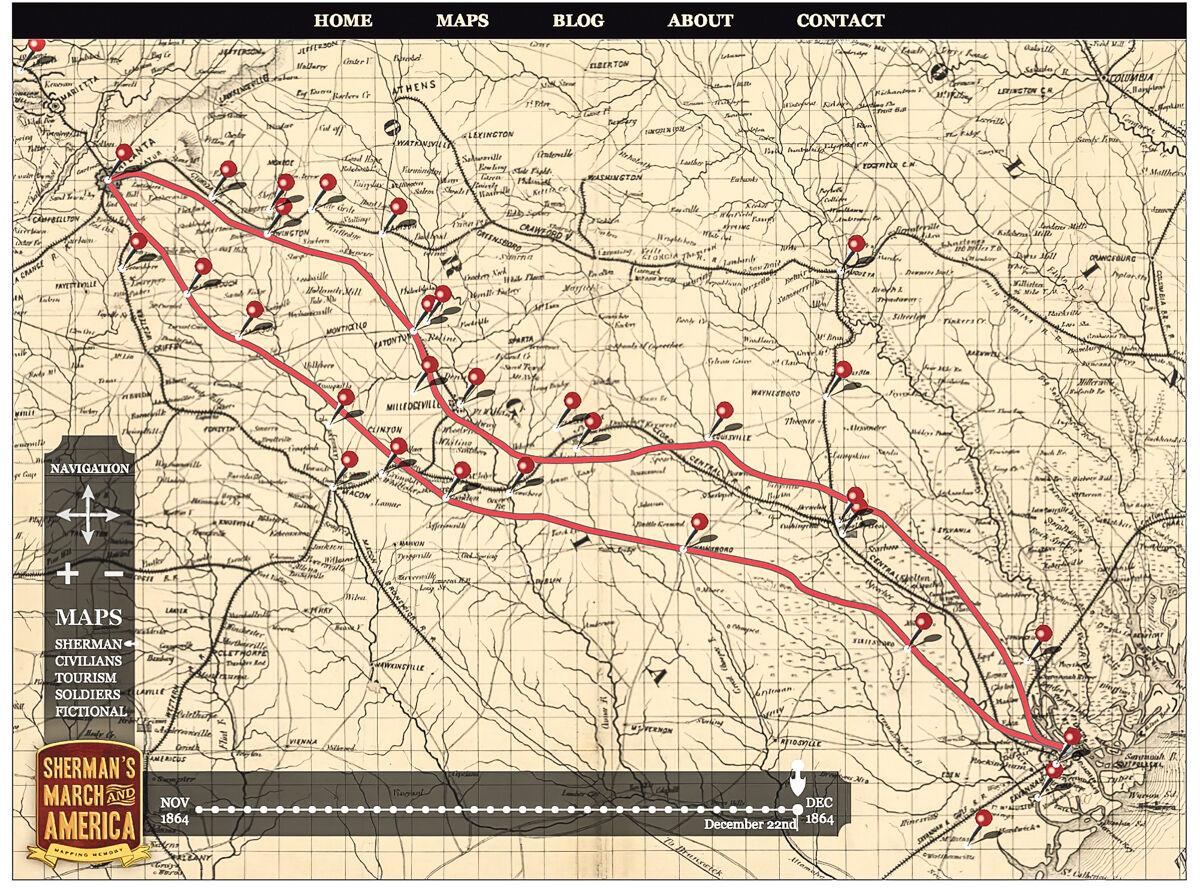 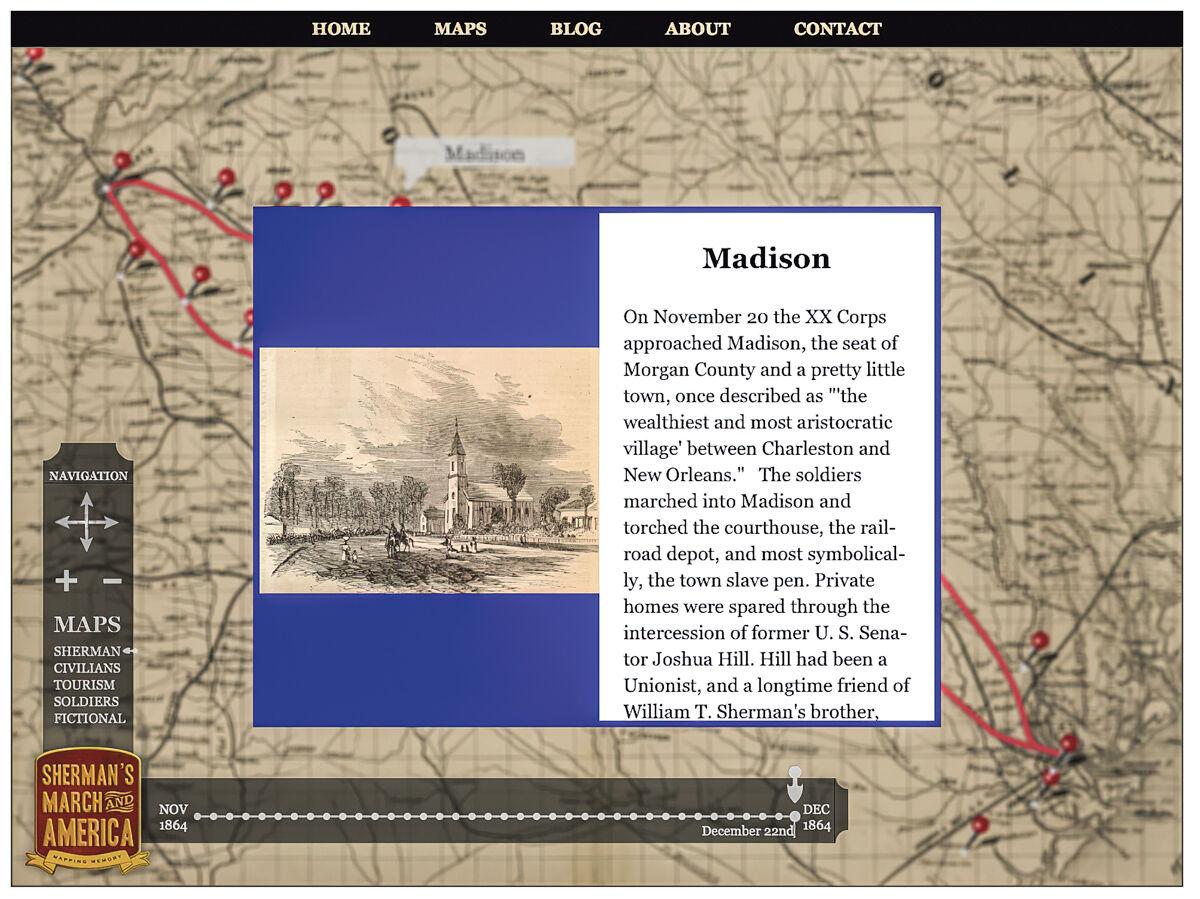 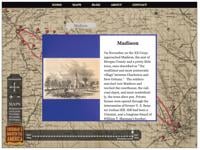 In conjunction with the sesquicentennial of the American Civil War, in 2014 historian Anne Sarah Rubin authored Through the Heart of Dixie:  Sherman’s March and American Memory. Working with Kelley Bell and others at the University of Maryland-Baltimore County, Rubin developed a companion website, one offering a visual guide to the Savannah Campaign or March to the Sea: http://shermansmarch.org. Begin your exploration of this site at http://shermansmarch.org/about/, to get an overview of the material provided and navigation tips.

Five interactive maps offer various views of the campaign: The Sherman or Fact Map, The Civilians Map, The Tourism Map, The Soldiers Map, and The Fiction Map. Visit the suggested starting link for an explanation of the data contained within each map. For this exercise, the Sherman or Fact Map (see screen shot) will serve as the foundation.

As shown at the bottom of the screenshot, the sliding bar allows one to drag left and right to advance or reverse, showing the movement of Shermanís left and right wings through the various stages of the campaign. Many of the pins on the map, when clicked, will offer popups containing period quotes. Some pins provide video clips or images. Researchers studying the campaign will benefit from this visual guide and the information contained within specific pins. See, as an example, the data from the Madison, Georgia, pin.

Check out the Civilians Map for details from folks on the home front—including African Americans—and spend time with the Soldiers Map for accounts of action during the campaign. Continued good luck in researching the American Civil War!

Michael K. Shaffer is a Civil War historian, author, lecturer, and instructor, who remains a member of the Society of Civil War Historians, Historians of the Civil War Western Theater, and the Georgia Association of Historians. Readers may contact him at mkscdr11@gmail.com or request speaking engagements via his website www.civilwarhistorian.net. Follow Michael on Facebook www.facebook.com/michael.k.shaffer, and Twitter @michaelkshaffer.