This extraordinary U.S. contract Colt Model 1860 Army revolver was manufactured in 1861 and is the benchmark example for approximately 129,000 Model 1860’s purchased by the U.S. government as the primary handgun issued to the Federal cavalry from 1860–1863. This Model 1860 Army revolver has the four-screw frame with shoulder stock cut-outs. Courtesy Rock Island Auctions. 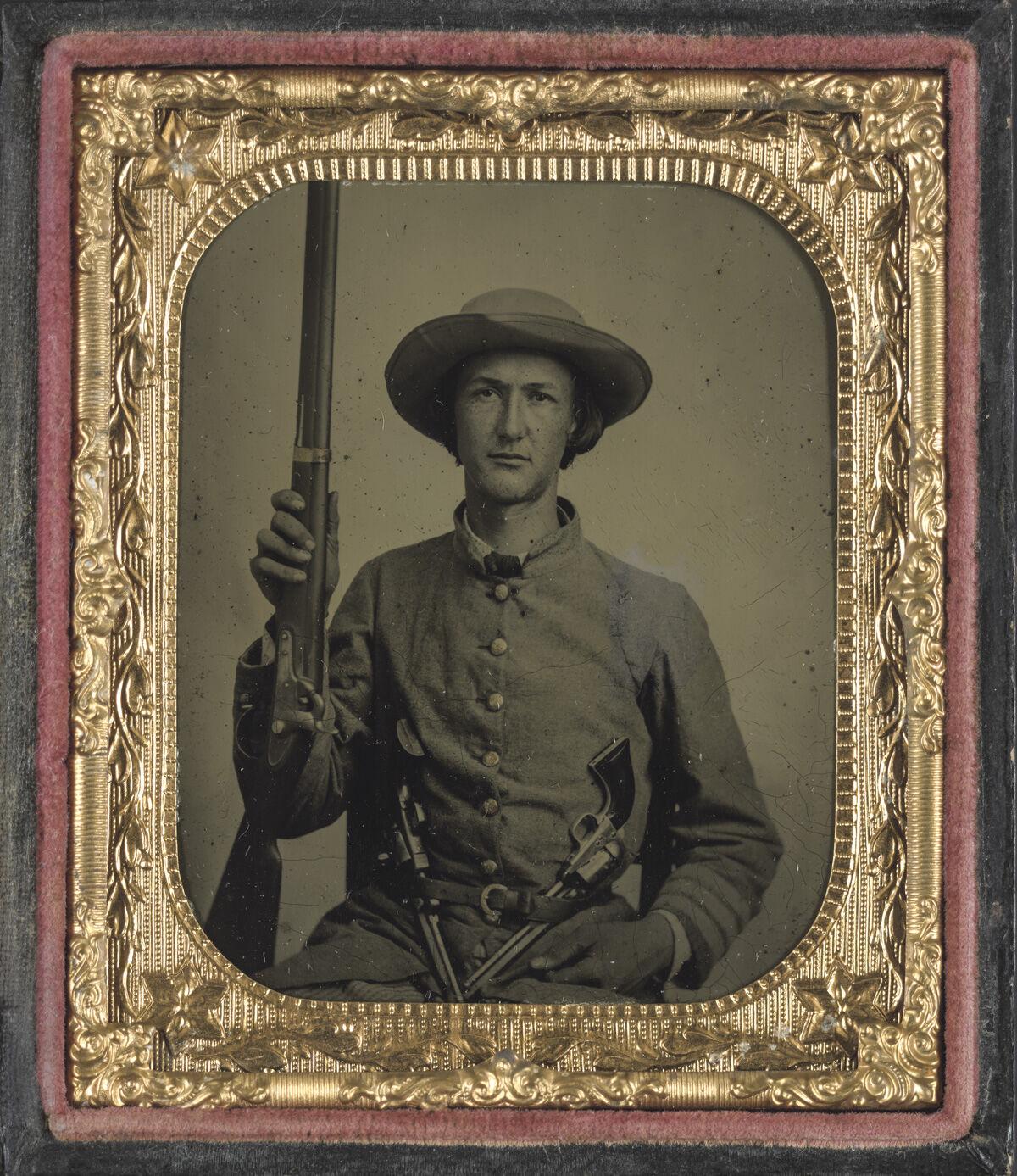 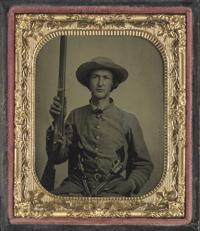 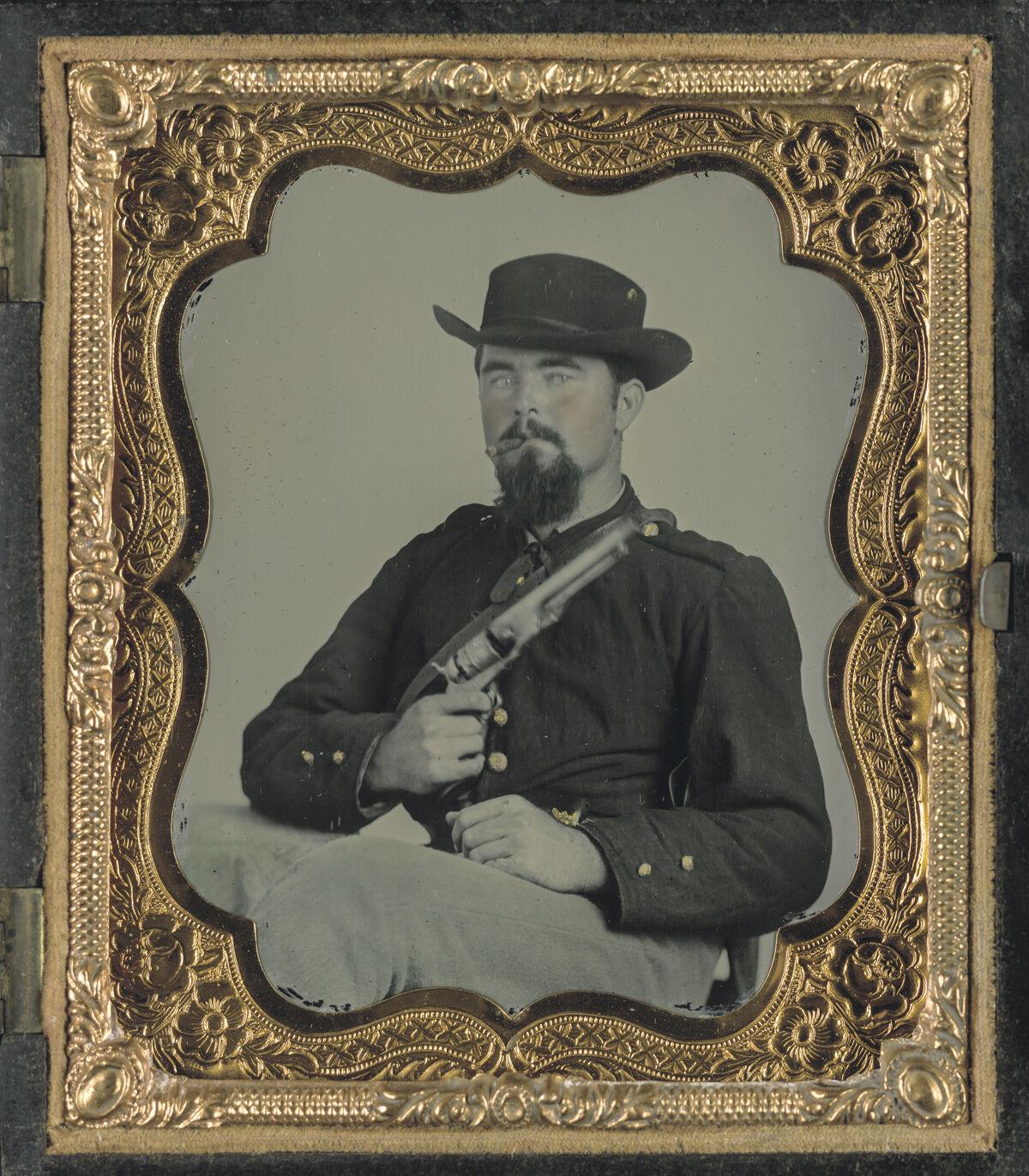 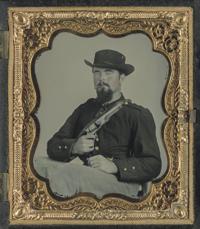 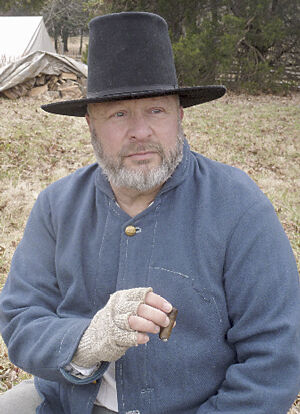 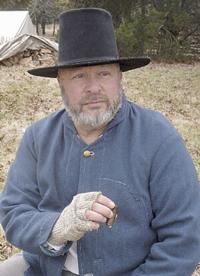 I have spoken of the rapid improvements made in arms...Revolvers were no exception and Colt’s revolver which monopolized the field for some time … Thousands were sold monthly and the newly fledged soldier who did not possess a revolver, either by his own purchase or as a present from solicitous relatives was something of a curiosity.” – Josh Billings (Hardtack & Coffee or the Unwritten Story of Army Life)

Colt produced their pre-Civil War revolvers were in three distinct categories based on how they were meant to be carried, which seems an odd way to categorize firearms. The smallest model was the .31 caliber, 5 shot revolver that Colt termed a “pocket pistol.” The cylinder was engraved with a stage coach robbery scene, of all things. These small revolvers had at least some Confederate provenance and one belonging to 4th Sgt. James R. Hughes of the 1st Tennessee is on display in the Carnton Plantation museum, Franklin, Tenn.

The more common 1851 .36 Navy and 1860 .44 Army revolvers were “belt models” and both had the same naval battle scene engraved on the cylinder, a nod to the 1843 Republic of Texas and Yucatan victory over a Mexican flotilla at Campeche prior to the Mexican War. An odd choice (again) with the Navy battle also being engraved on the so-called “Army” model. The newly designed 1860 Colt Army model was a slimmed down version of their earlier .44 “holster revolver,” a category included the largest models like the Dragoon, Walker, and Paterson, in other words the large frame four and a half pound “horse pistols.” The cylinders of the large “holster revolvers” are engraved with a commemoration of ‘Hays big fight’ on the Pedernales against a Comanche raiding party that took place in 1844. The reason for the odd and elaborate cylinder engraving was an attempt by Colt to protect his patents. Even antebellum, Colt “clones” were already being produced.

In Civil War terminology, the terms pistol and revolver are used interchangeably but in modern nomenclature they have distinct meanings. A ‘pistol’ is a hand-held single shot muzzle-loader and a ‘revolver’ is a multiple shot repeater with a rotating chamber loaded cylinder. The long-hinged apparatus under the barrel was called a loading lever, used in seating the ball on top of the powder charge in each chamber during the time-consuming re-loading process.

It seems that many infantry soldiers started out with at least one pistol or revolver in their waist belt. How long they may have kept them is another matter. This is because there are very few instances of an infantryman making any reference to use of his revolver during an actual battle. There are several reasons why revolvers may have played a diminished role in full scale infantry encounters in the U.S. Civil War. First, the black powder handgun was primarily a short-range defensive weapon. Colt stated that their belt revolvers were “as effective as a common rifle at 200 yards,” but this is perhaps a bit exaggerated. Claud E. Fuller noted in the appendix of The Rifled Musket, (1959 Stackpole Publishing Co, Harrisburg, Penn.) that at 200 yards the rifle-musket hit rate ranged from 64% to 82% at fixed targets on a firing range. Such marksmanship was not in wide evidence on the battlefield if period accounts are to be trusted. A reasonable conclusion is that at a distance of 200 yards the effectiveness of the rifle-musket is about 2 out of 3 at hitting a man-sized target on a practice firing range. Battlefield hit rates were much lower since the “targets” fire back. Hence, one has trouble imaging any revolver with its much shorter barrel hitting four of six shots fired at 200 yards in any infantry battle situation. So, what was the reasonable effective range of a revolver?

The limit of the actual effective range of the Colt revolver in the hands of someone well-schooled in its use is probably closer to 75 yards. The best evidence is from a duel between “Wild Bill” Hickok and a gambler named David Tutt Jr. on July 21, 1865. Hickok killed Tutt with a single shot from one of his Colt 1851 .36 Navy revolvers. The fight was noteworthy because of the “great distance” involved, estimated at 75 yards. Hickok was (of course) considered a very capable marksman when not inebriated, so the 75-yard figure is probably a realistic upper limit of the effective range of a Civil War-era cap and ball revolver in the hands of a professional gun fighter. However, for anyone not named Wild Bill Hickok, probably 25 to 50 yards is the upper limit to hit the intended target with four out of six shots. Most infantry engagements were contested at a considerably greater distance.

Further, in some instances soldiers were forbidden from carrying revolvers. In the Civil War Diary of Confederate Pvt. Jacob D. Smith, (Company D, Camps and Campaigns) he noted that “Many soldiers had revolvers; and as many regiments were forbidden by their Colonels to wear them, so a large number were sent back home. Revolvers were probably cheaper in Virginia in those years than in any other state in America.” So, if we are to conclude that revolver use among infantry rank and file was more or less the exception to the rule, where were all the revolvers going and who used them?

Well, most assuredly revolvers were very widely used by Confederate horsemen where engagements between forces were at much closer range. The overwhelming favorite was initially the 1851 Colt .36 Navy model based both on pre-war availability and its reputation for reliability, followed closely by the newer 1860 .44 Colt Army model as these became more widely available (mostly) through capture. It is easier to name the Confederate generals who did not carry a Colt revolver than to list all of those who did, a compilation that would begin with Robert E. Lee and Nathan Bedford Forrest. In contrast, the Union purchased very few Navy revolvers, but ordered close to two hundred thousand of the newer .44 caliber 1860 Army revolver, which was essentially a larger diameter barrel on the lighter Colt Navy frame. It was a winning combination in the right hands, but it needed to be drawn out of its holster to be effective. A major from the 2nd Michigan Cavalry noted: “Pistols are useless. I have known regiments that have been in the field over two years that have never used their pistols in action.” This shows the limited grasp of cavalry tactics by some Union soldiers on horseback. Hence, the Union cavalry began the Civil War perhaps better equipped with larger caliber Colt Army revolvers, but on orders from their commanders, most often began their charge (foolishly) with nothing but sabers drawn. As an obvious result, “…the rebels shot their saber wielding adversaries out of their saddles.” One wonders how exactly the saber beats any six-shot revolver in close quarters?

No less an authority on cavalry tactics than Nathan Bedford Forrest preferred the Colt Navy revolvers. He purchased five hundred “Navy Sixes” during October 1861, in Louisville, Ky., then smuggled them to Memphis, Tenn., in potato sacks. Once back in Tennessee, they were issued to the men in his command. Forrest recommended each man carry a ‘brace’ meaning two revolvers, rather than a revolver and a saber. He carried at least two Colts himself and was known to “shoot his adversaries out of their saddles” with them as often as the opportunity arose. In one instance, at Bogler’s Creek, Ala., the 17th Indiana Cavalry attacked in the traditional fashion with sabers drawn. Forrest was engaged by an Indiana cavalry officer who was enthusiastically hacking at him with his saber. As soon as Forrest managed to get a few yards removed, he turned around, drew his revolver and shot his attacker. Six or seven others were found nearby killed in similar fashion. It must have been like shooting fish in a barrel.

The popular (newer) Colt revolvers were often taken through capture. While a well-known user of the LeMat, J.E.B. Stuart captured a wagon full of new Colt Army revolvers during his ride around McClellan during the Seven Days battles. Southern production of the Colt knockoffs never quite met the demand, so most Colt revolvers that saw Confederate service were either pre-war private purchases or captured arms. Except for the Nathan Bedford Forrest transaction in 1861, which was likely through intermediaries with Confederate sympathies, there are no records of Colt factory sales direct to the Confederacy during the Civil War-era. Concerning revolvers that were commonly captured, Bell Wiley, noted in The Life of Johnny Reb: A Common Soldier of the Confederacy, that besides the popular Colt 1860 Army and the “new” updated 1861 Navy design, included those manufactured by Remington, Starr, Whitney, Beal and Joslyn “…but Colt six-shooters were by far the most common.”